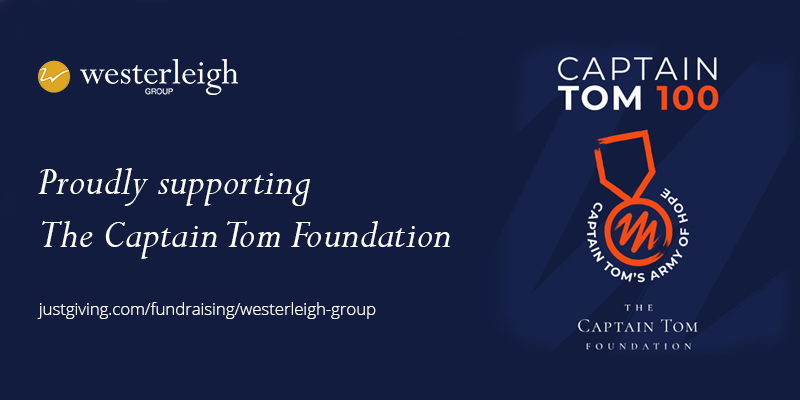 Staff at West Wiltshire Crematorium are honouring pandemic hero Captain Sir Tom Moore by raising money in his memory on what would have been his 101st birthday on 30 April.

Westerleigh Group, the UK’s largest independent owner and operator of crematoria and cemeteries, including West Wiltshire Crematorium, is challenging staff at its 35 sites nationwide, to come up with creative ways of supporting the Captain Tom Foundation.

The group has also set up a Just Giving page and is inviting anyone from the communities served by them to pay their own tribute to Sir Tom by donating, perhaps in memory of their own loved ones.

All seven members of staff at West Wiltshire Crematorium are teaming up to walk, between them, 100 laps of the perimeter of the ten-acre site, covering a total distance of around 40 miles.

Shaun Chapman-Young, West Wiltshire Crematorium site manager, said: “The coronavirus pandemic hasn’t gone away, and we’re very aware that we still need to remain safe, so we thought what better way to support this great cause than to emulate the achievements of Captain Tom in our own grounds.

“We are all different ages and fitness levels, so we are doing to start on April 29 and complete the challenge on what would have been Captain Tom’s birthday.

“The team here is excited about the challenge, although we didn’t realise quite how far the overall walk would be.

“But it will be worth it. Captain Tom was an inspiration and did so much for our country in its time of need.”

Captain Tom captured the hearts of the nation during the Coronavirus pandemic when he raised an amazing £38.9m for NHS Charities Together by walking 100 laps of his Bedfordshire garden before his 100th birthday.

He also had a number one hit UK single, with a new version of You’ll Never Walk Alone, which he recorded with Michael Ball.

His efforts also earned him two Guinness World Records, for raising the most amount of money in an individual charity walk and being the oldest person to top the UK singles charts.

On 17 July 2020, he was knighted by the Queen at Windsor Castle. He died on 2 February 2021 at Bedford Hospital after being treated for pneumonia and then testing positive for Covid-19.

The Captain Tom Foundation was launched in May 2020 to ensure his inspiring message of hope, and that “tomorrow will be a good day”, becomes a lasting legacy.

The Foundation is running the Captain Tom 100 campaign to coincide with what would have been his 101st birthday, challenging people to undertake fundraising challenges around the word 100, whether it be baking 100 cakes, walking 100 metres, writing 100 letters or anything else they can come up with.

Shaun added: “The Captain Tom Foundation raises money for charities and organisations which were close to his heart, including several which support people, and their families, with life limiting illnesses and who are facing or coping with bereavement.

“As we work in the bereavement sector, this is particularly close to our hearts, which is why Westerleigh Group and West Wiltshire Crematorium were keen to support the foundation and honour Captain Tom’s 101st birthday.

“Anyone in the community who has used our crematorium can support our fundraising effort, by making a donation to our new Just Giving page.

“The senior leadership team at Westerleigh has got our fundraising started with a £500 donation.

“Through the efforts of our colleagues and the support of our communities, Westerleigh Group wants to be able to make a meaningful donation to the Captain Tom Foundation to mark what would have been in his 101st birthday.”

Anyone who would like to make a donation can do so through Westerleigh Group’s Just Giving page, mentioning West Wiltshire Crematorium in their donation message. The page can be found at  www.justgiving.com/fundraising/westerleigh-group